Planning a Trip? Ask Your Question

"The land of Jungle Book"

Located in a central region of Madhya Pradesh, Kanha National Park is the largest National Park in central India and has been ranked as one of the best parks in Asia. Among the 22 species of large mammals, the royal Bengal tigers are one of the major attractions. One of the best tiger reserves in India, the present-day area stretches over the 940-kilometre square which is divided into two sanctuaries: Hallon and Banjar.

The park was established in the year 1955 and has since actively contributed to the preservation of many endangered species. The National Park was taken under the Project Tiger Reserve in 1974. Abundant in flora and fauna, the Kanha National Park houses one of the rarest species of deer- the Barasingha. It is known for the unique Barasingha conversation to save the species that were once on the verge of extinction. One of the most scenic wildlife reserves in Asia today, this National Park came to be known the world over through Rudyard Kipling's book- The Jungle Book.

Kanha National Park is famous for its wildlife safaris and attracts tourists from all over the world. Other important animals in this park are leopards, wild dogs, wild cats, foxes, sloth bears, hyenas, langurs, wild boars and jackals. Reptiles including pythons, cobras, krait and other varieties of snakes are also found in this National Park.

The Jeep Safari is the best way to explore Kanha. It is very easy to find a jeep safari in Kanha, as it is one of the hotspots in India for spotting tigers. Since the costs are typically per jeep, its advisable to share your jeep in case seats are available. The safaris are allowed in two slots: morning (6 AM to 11 AM) and afternoon (3 PM to 6 PM). Morning slot typically has more chances of spotting tigers. The costs would be around INR 1000-2000 for a jeep. The evening safaris are slightly cheaper than the morning ones. You can book a 4 seater safari from your resort and they will also pack breakfast for you in the morning slot.

Elephant safaris could be very exciting here and they are typically available in the morning slot. It might cost you around INR 300-600 per head. 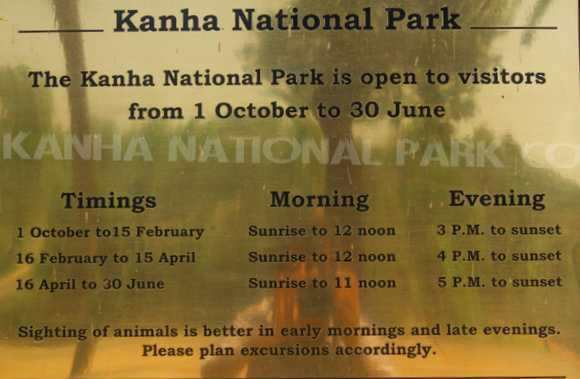 Divided currently into two sanctuaries, Hallon & Banjar, the lush green landscape and ravines of this site inspired author Rudyard Kipling to give his most significant creation ever, The Jungle Book. The tiger reserve that is the centre of attraction in Kanha National Park, houses the endangered species of Royal Bengal Tiger. Kanha also sports a wide range of exquisite flora and fauna, from the lush green sal and bamboo trees to the rare breeds of hard ground stag [Barasingha], Gaur [Indian Bison], Swamp Deer as the list goes on.

Also known as the Sunset Point, Bamni Dadar is the highest plateau in the national park offering a serenading view of the vastness and beauty of the meadows. Many visitors review this as the most beautiful place to view the sunset. This is the last location for most evening safaris organised by the park for spotting the barking deer and Indian bison.

Kanha brings around 300 species of birds which attracts many bird watchers and photographers for taking account of these majestic creatures. Excellent birding surrounds the eastern region where they can explore the trails, waterways and forests in search of elusive species. With an array of birds that are unique to this area of Madhya Pradesh, species in the park include storks, teals, egrets, peacock, peafowl, amongst many other. A binocular, bird guidebook and a camera equipped with suitable lenses are must-have essentials to experience the kaleidoscopic avian beauty. Bird watchers and researchers are often attracted by the exotic species in these grasslands such as Asian Paradise Flycatcher, White Rumped Shama, White Bellied Drongo, Spangled Drongo. Racket Tailed Drongo, Tawny Babbler, and so many more.

Hundred of acres of grassy meadows, ravines and streams, indeed a paradise for the wildlife in Kanha. Fitting under such a description of the geography, the park provides natural habitat to a huge variety of animals. Also known as the Kanha Tiger Reserve, it is a home of several tiger species including the Royal Bengal tigers which attracts a major population of wildlife enthusiasts. It also hosts a large population of leopards, jungle cats, wild dogs and jackals. Some commonly spotted mammals in the reserve are tiger, chital, sambar, barasingha, barking deer, chousingha, gaur, langur, wild pig, sloth bear, black buck, hyena, wild boar, rudd mongoose, Indian Fox, Badger, Indian Hare and Wild Dog along with several species of reptiles including Indian Monitor, Fan Throated Lizard, Indian Garden Lizard, Russell’s Viper, Python, Indian Cobra, Indian Krait and Rat Snake. The reserve has been instrumental in hosting some of the very rare and endangered species of mammals, reptiles and birds.

Being a national park, the eating options here are limited to the ones inside the hotels and resorts. These can provide you both local delicacies as well a multi-cuisine experience. The local delicacies of Madhya Pradesh that you might chance upon here include Dal Bafla, Biryani, Kebabs, Bhutte ki Kees, Korma, Poha, Rogan Josh, Jalebi, Ladoos as well as beverages like Lassi and Sugarcane Juice.
View Top Restaurants in Kanha National Park

Day 1 - Reach Jabalpur, preferably by noon, and take some rest. In the evening, you can take a stroll on the city side, and buy some curios and souvenirs for yourself. Or if you're enthusiastic enough, you can set off at once for the main national park.  Day 2 - The next day should ideally be the start of the trip to the Kanha National Park. You can start with the tour of the Tiger Reserve, which houses the Royal Bengal tigers. Not very far from is the reserve that houses the Indian bison, Swamp Deer & also the rare breeds of Hard Ground Stag [Barasingha as known in local lingo].

10 Chances To Spot Tigers This December!

Places to visit near Bhopal

What is not so good about Kanha national park?

What are the places near Kanha national park?

What are the top hotels in Kanha national park?

What is the best way to reach Kanha national park?

The nearest airport and railway station is in Jabalpur(3 km), which connects Kanha National Park with all the major cities in the country. You can also hail cabs or buses from the nearest city, Mandla.
Read More

What is the local food in Kanha national park?

Being a national park, the eating options here are limited to the ones inside the hotels and resorts. These can provide you both local delicacies as well a multi-cuisine experience. The local delicacies of Madhya Pradesh that you might chance upon here include Dal Bafla, Biryani, Kebabs, Bhutte ki Kees, Korma, Poha, Rogan Josh, Jalebi, Ladoos as well as beverages like Lassi and Sugarcane Juice.
Read More

What is the best time to visit Kanha national park?

The best time to visit Kanha National Park is from October to March as after March the temperatures begin to heat up. The park is open only from mid-October to June end.
Read More

Who should visit Kanha national park?

Ideal for tourists of every kind. Suitable for backpackers from places like Jaipur, Jodhpur etc.

What is famous about Kanha national park?

A natural heaven. One of the major tiger reserves in India

Have a Question on Kanha National Park?

Ask a question from the travellers who have experience.

Q. Do you offer packages for 2 people, ladies only? I am looking for hotel + safari booking on sharing basis. Safari booking is must?

3 years ago
yes..!
Add Your Answer

Q. Which are the best places to stay at near the reserve?

4 years ago
Krishna Jungle resort and Wild chalet are good resorts near Kanha National Park. Krishna also has a swimming pool and you can easily go there with family. The resorts will also organize your jungle s (Read More)afari.
Add Your Answer

4 years ago
- Get your accommodation in advance and book safaris well in time.
- Keep in mind the timings of the park. The park is closed between July and October and the visiting hours are during day hours o (Read More)nly.
- Sharing a jeep safari is advisable as safaris are charged per jeep.
- Maintain the rules and regulations of the National Park.

Plan your trip with experts and get best offers

Login for a personalized experience with Holidify!